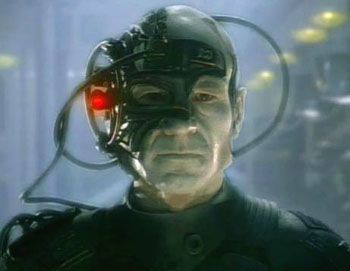 We are Borg: Cultural Homogenization and Social Media

The Borg are a fictional race of cyborgs in which each individual’s consciousness is linked to that of all other individuals, forming a collective conscience or hive mind.

It sounds like a crazy concept, but I’m convinced that we are headed in that direction. What’s really crazy is that it’s already been going on since the beginning of human existence.

We’re becoming a collective consciousness, but it’s not necessarily a bad thing.

I am referring here to what is known as cultural homogenization, a process by which smaller, more localized cultures disappear in favor of more popular, global cultures, until there remains only one global culture. This process happens when small, heterogeneous cultures exchange cultural artifacts with each other. People in one culture may replace their own artifacts with those of other cultures that they prefer to their own. Over time, popular cultural artifacts supersede the individual cultures, unpopular artifacts disappear, and the cultures resemble each other more.

Yes, It’s Happening to Us

Many things set the stage for homogenization now, but two are particularly potent: globalization and social media. Globalization is making locally-produced goods available globally. That means wine made from Merlot grapes in the Bordeaux region of France, formerly only available in that region, is available now in China and the rest of the world. Social media (and the internet) does the same for ideas, like making African artists’ works, formerly only available in Africa, now accessible in the Netherlands or anywhere else internet is available.

The homogenization part happens when I start drinking Bordeaux wine and stop drinking my own local wine, or when I am inspired by African artists and no longer look for art where I live. Ongoing trends of homogenization are well-documented in areas like linguistics and culture as a whole. This documentation comprises books, journals, websites, and university curricula; you don’t have to take my word for it.

This Has Been Going On for Millenia

While it may sound like we’re in a crisis here, we’re actually not. As soon as humanity was born, it was put on the path of homogenization. Hunter-gatherer bands comprised a few people, but there were many of them in inhabited areas. Some of these bands died, and some joined together to form tribes. Tribes joined to form feudal clans, these clans joined to form kingdoms, and kingdoms eventually joined to become states. States joined to become even nations.

At each step, whenever smaller groups join to form larger, stronger groups, less popular ideas and cultural artifacts were lost in favor of the more popular ones, because a group of humans, no matter how large, develops its own identity.

Is It a Problem?

Is homogenization happening to our world’s cultures? Absolutely.

Can we stop it or slow it down? Absolutely not.

But it’s natural and necessary.

Sure, our cultures our homogenizing more every day. It’s an ongoing process, but a very natural one, and one that is necessary for our survival. No matter how long the process goes on, the human race can never become fully homogenized, and a completely collective consciousness could never develop.

Theoretically speaking, there are many specialized tasks that need to be carried out in order for the human race, as a superorganism, to survive. This specialization occurred very early in human development, and it means that every human being will have her own job. Each job requires special skills and knowledge that is useless to people with other jobs, and it would be highly inefficient (and beyond human capacity) for everyone to learn everyone else’s job, including her own. This already separates people across job specialization, but people with different jobs will form different groups, which will develop different cultures, making a collective consciousness impossible.

Practically speaking, no matter how good we get at transporting things around the world, the fact remains that our planet is topographically diverse, hosting many different environments. People need to adapt to these environments in different ways in order to survive, and resources are not abundant or available uniformly across all environments. Humans adapting to these different environments form groups, which form their own cultures, precluding the possibility of a collective consciousness.

We’re safe. Until the sun supernovas and destroys the Earth…