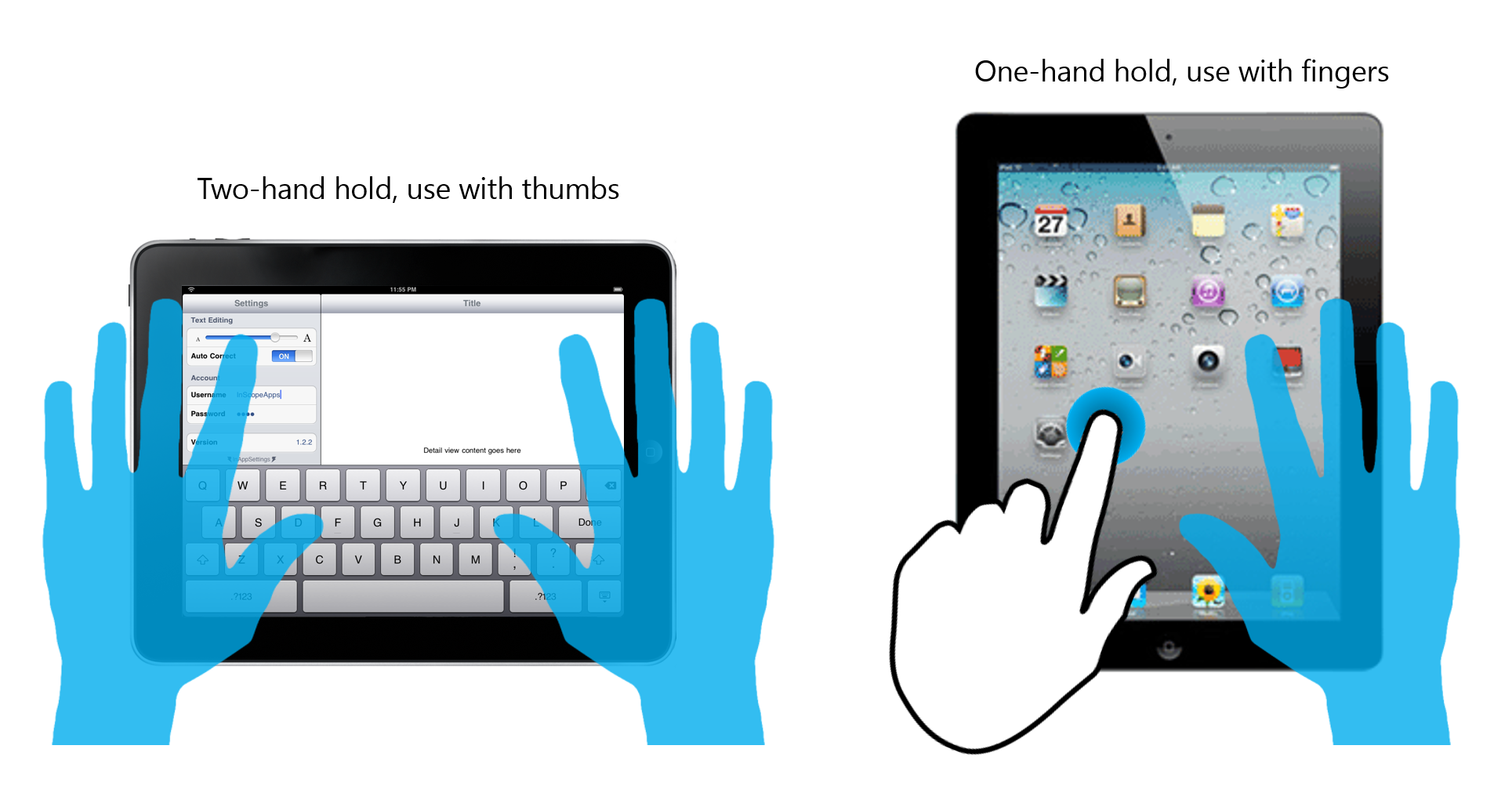 Interface Design for Mobile and Tablets: Landscape vs. Portrait

Orientation is one inevitable question when designing and/or developing for mobile (or any other display that can be rotated). While some go for a one-orientation solution, “That’s the way the information wants to be, anyhow,” others say that screen orientation should be determined by the task at hand or people’s preference in hardware form factor.

The truth is, there is no single way to determine how to use screen orientation in an app. There are several factors to consider when making that decision.

When designing things for people to use, we are obligated to think first about those people and how they use things. That’s Human-Centered Design, and usage context provides the most important input for design and development. Here are specific contextual questions for orientation.

Human Context: Who are They?

Children use digital content now more than ever, and they have smaller hands than adults. They also have weaker motor skills than healthy adults do, a human factor that also applies to e.g. stroke victims.

What that means is that some people’s hands might be too weak or too shaky to hold e.g. a tablet in one hand while using it in the other. A landscape orientation invites people to hold a device with both hands, which might provide them with the extra stability they need.

Human Context: Where are They?

We know that different people hold devices differently, depending on its orientation. People also favor different orientations in different use contexts. When people are concentrated primarily on the device, especially at rest, they favor a landscape orientation, holding with two hands. While on the go or using the device to support another primary activity (e.g. grocery shopping), people tend to prefer the device in portrait, holding it with one hand.

Tech Context: What are They Interacting With?

Thankfully, designers and developers can draw from a long legacy of best practices that tell us how people prefer to carry out certain tasks and how we can best support those preferences. In other words, we know that some Interface layouts and patterns are better suited to one orientation than the other. Large blocks of content and plain-content lists, for example, work best when they can be scrolled vertically; portrait orientation supports that nicely. Multi-faceted views and rich-content lists and, on the other hand,  the work best when they can be scrolled horizontally, a great job for landscape orientation.

Platform is another technical consideration. When building a website, for example, there are no guarantees as to a person’s hardware or browser; the design needs to be flexible. There is also a Split View that adds an extra bit of complexity when considering orientation and layout.

Finally, hardware differences, like button positioning or speaker placement, also impact a person’s experience. Accidentally pressing the home button will ruin a crucial moment in a game; covering a phone’s speaker with your hand makes it harder to listen to music.

There are lots of ways designers and developers can leverage orientation to make things work better. This Smashing Magazine article illustrates some good patterns and could provide some inspiration. Here are some examples I like.

Mush is a really nice mobile game, where the game character moves according to how the player tilts the phone. Because of that, its layout is fixed in landscape. How badly would it suck if your game would be constantly interrupted by a flipping display?

Another good app is Nokia City Lens, which accommodates different ways of using the same information. In portrait orientation, it shows a list of nearby businesses and points of interest, based on the device’s location. In landscape orientation, it shows that same list in augmented reality, superimposed over the camera’s image of the user’s surroundings. Switching between these modes is a just a matter of rotating the device.

This blog post is about using screen orientation in UX design. However, with interfaces disappearing and everything getting connected, a screen may function differently or play a different role than what we have seen so far. The Nike+ Fuelband pictured above, for example, doesn’t have a screen at all, but an LED array. Technically, it’s landscape-only, but users can flip the display depending on which wrist they wear the bracelet.

I wonder what other kinds of displays will emerge and how we will be using them in the future!

In any case, here are some relevant design guidelines for inspiration:

Special thanks to Wouter Sluis-Thiescheffer for inspiring this post!